​McCabe Management, Karen and Tom employ and are supported by at least a half dozen Madeira tax paying  residents. Tax's paid by McCabe employees pay the  $100,000.00 plus annual salary collected by Manager Moeller. 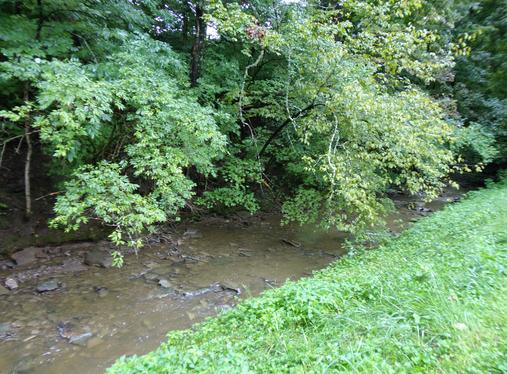 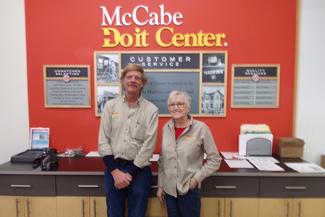 McCabe Do It Center Donations 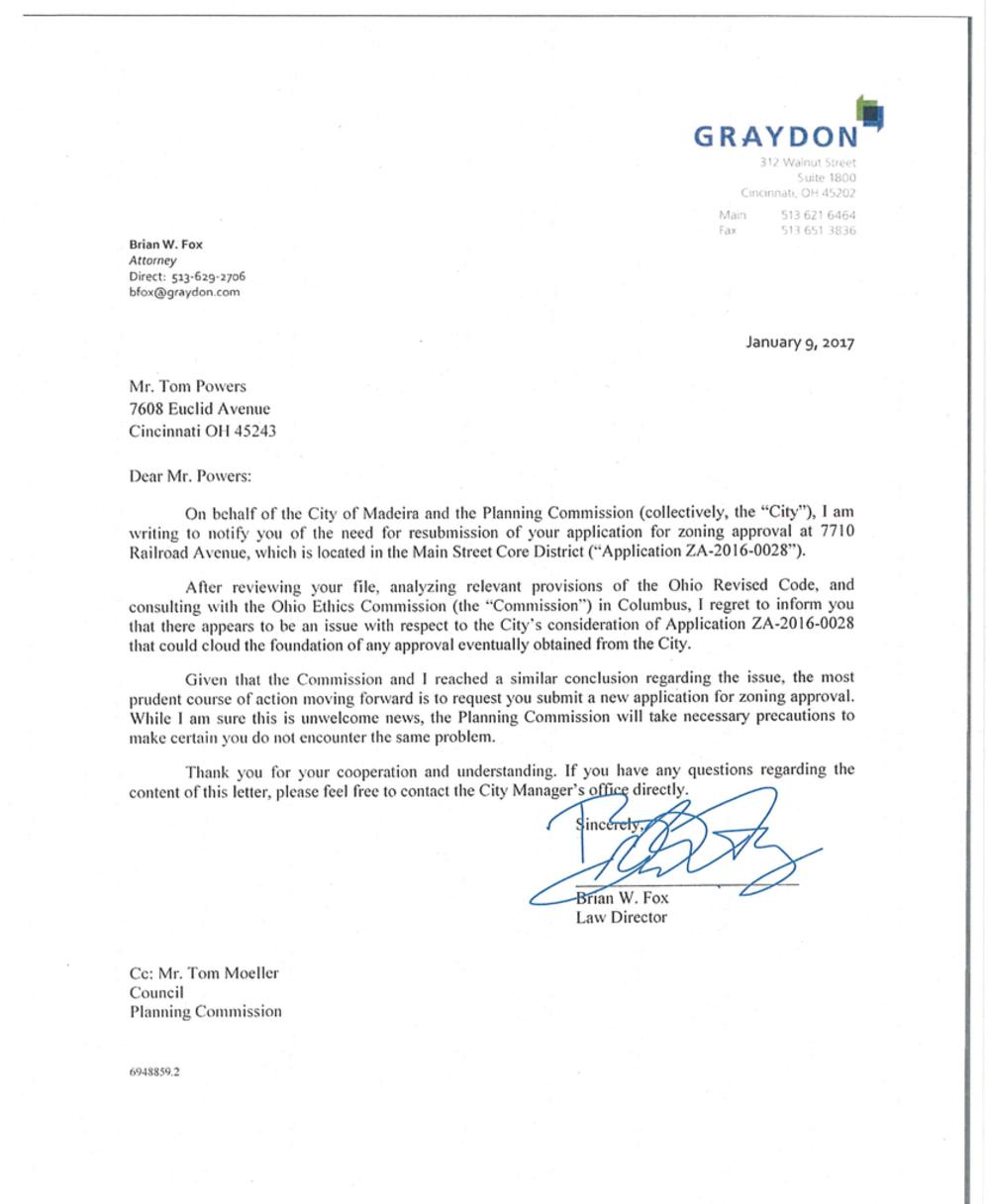 ​This Is How a Well Managed, Well Governed City Plans For Redevelopment......

​         ​  The vacant B&B Mower property is only one part of our downtown in need of development. For nearly seven years our city manager and council members have ignored Madeira business owners missing an opportunity to create an incredible Madeira downtown. A new building from Laurel Avenue to Railroad Avenue that would include a new structure for Madeira Meats, the Flower shop, two new Restaurants and a Vinyl Record retail store. One developer would be chosen representing all of the current Madeira Businesses located in the area that would be redeveloped. Parking will be the challenge as always, but should discussed in an open forum. What is best for the business owners and for our community. The entire area circled in green is ready for redevelopment. 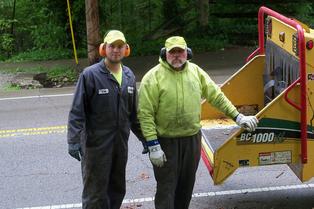 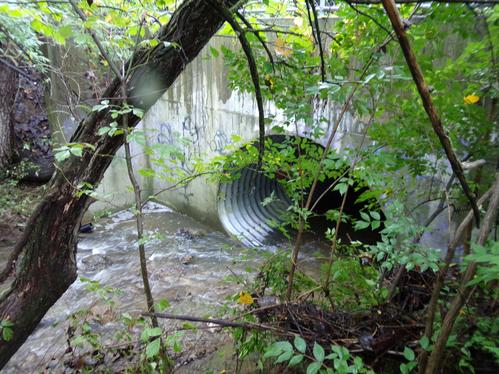 ​       ​"I am writing to notify you ( Developer Thomas Powers ) of the need for resubmission of your application for zoning approval at 7710 Railroad Avenue, which is located in the Main Street Core District ("Application ZA-2016-0028"). Our Law Director in his January 9, 2017 letter goes on to say, "After reviewing your file, analyzing relevant provisions of the Ohio Revised Code, and consulting with the Ohio Ethics Commission (the "Commission") in Columbus, I regret to inform you that there appears to be an issue with respect to the city's consideration of Application ZA-2016-0028 that could cloud the foundation of any approval eventually obtained from the city".

​         "The most prudent course of action moving forward is to request you submit a new application for zoning approval". "Planning Commission will take necessary precautions to make certain you do not encounter the same problem". Developer Thomas Powers, often in collusion with our city manager two different city attorneys, and various city  council members has been attempting since 2011 to build a restaurant for developer Powers. This letter is just the most recent mystery in the Madeira / Powers saga, and comes soon after Madeira Law Director Brian Fox received a letter from Loveland Attorney George Parker, (Page 2) questioning the potential of Ethics violations and conflicts of interest. Attorney Fox has refused to address the questions posed in the letter from Attorney Parker. Mr. James Tepe in a letter to City Council (Page 2, "Is Powers suing City of Madeira ?") has asked the logical question, why isn't Powers, the Johnsons or both suing the City of Madeira?

​       Now lets take a close look at the letter from Fox. In the letter our attention is focused on the Zoning Application number throughout the letter, ZA-2016-0028. This number is the key used from beginning to end in the Madeira zoning request process. In his letter addressed to Mr. Powers Attorney Fox clearly states that any approvals given under ZA-2016-0028​ have now been subjected to recession. The following are the zoning approvals that have been voted on and approved by the Madeira Planning Commission identified specifically with the application number ZA-2016-0028.

​2nd approval now subject to recension and resubmission. Hearing date was August 15, 2016, request was made for a final MSC development plan approval, applicant was Thomas Powers. The planning commission did not approve this application as a final approval but instead decided to approve as a preliminary approval. As of this date (February 18 2017) our planning commission members have purposely not approved the minutes from this Planning Commission meeting. Minutes from this meeting are posted below..

​   ​   Today we know that Madeira City Employees have been seen in places outside our city, sometimes one employee in a city vehicle and at other times two employees. Our public works employees have been according to madeiramessenger sources, sighted in Silverton on Montgomery Road parked in front of the Silverton Hardware store, in the Dillonvale Shopping Center parking lot, at the Home Depot Store on Highland Avenue and the Lowes Store in Norwood. The investigation continues, and your help will be appreciated. If you see any of our city employees in any of these locations please let the messenger know, when was the sighting and where did you see Madeira City Employees. it is estimated that the cost per hour per employee is at least $45.00, not including the cost of fuel and the vehicle. Meanwhile city services are reduced because our city workers are taking long road trips, missing from  work.  For more than 100 years our city officials have instructed city employees to buy locally previously at the George Meyer Hardware and Lumber when Councilman  Chris Hilberg was owner of the store, and it was  thought that purchases were now made at the McCabe Do It Center, located on Laurel Avenue, but not so. There apparently are many more facts that need to be investigated relating to this matter. ​Watch for more.

​       August 11, 2017, Our City Manager, Thomas Moeller is seeking personal retribution at the expense of Madeira Tax Payers, reducing the effectiveness and productivity of our Public Works employees, while jeopardizing their safety. The messenger has just reviewed the results of a "Public Records Request" confirming that Moeller has instructed Public Works employees to drive past the McCabe Do It Center and drive out of Madeira making purchases at Silverton Hardware, Home Depot and Lowes. Our City Council members and our Chamber members are always touting the slogan "Buy Local". This would never have happened when Councilman Hilberg owned and managed the George Meyer Hardware and Lumber Company.

​      We already know that City Manager Moeller believes that he has no obligation to follow the requirements in our city Charter (Page 11, Moeller Testimony) , and now it is clear that Moeller also believes that he can take out his personal frustrations in an action that should not be condoned, by residents nor by our Mayor, Adrien, Vice Mayor, Theis and council members. Moeller is abusing his power, improperly using city employees and tax payer revenue for person retribution in a "Pay Back" effort.  This action comes on the heels of Moeller commanding a subordinate to assist Moeller in committing Fraud against the Hamilton County Board of Elections in the resent May 2nd election (see page 11, Doyle, Lowndes, and Moeller testimony). The employment of Mr. Moeller as Madeira city manager needs to end. See what the cost has been and the wasted Madeira tax dollars posted on red button above and review the good, done by the McCabe Do It Center, on Green button above. 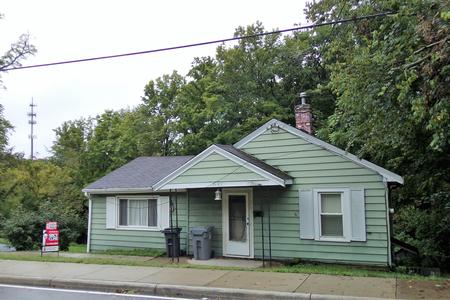 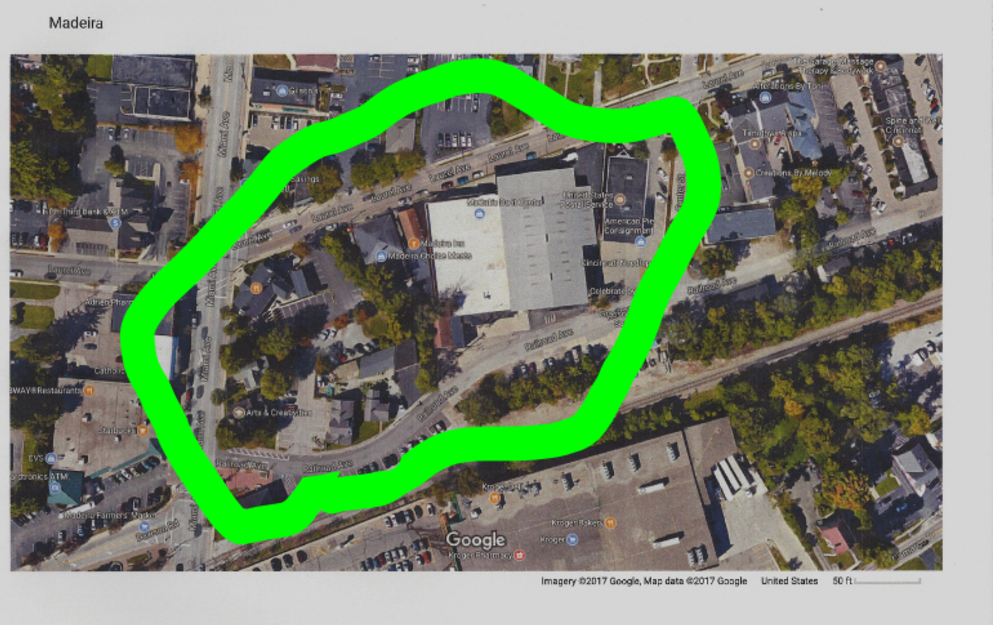 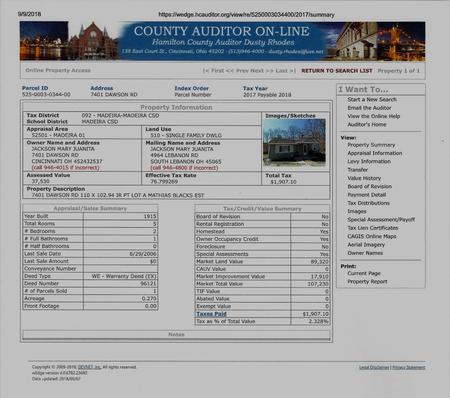 The question has been partially answered, Madeira is not "living paycheck to paycheck". Does any member of this city council really know what it means to live "paycheck to paycheck", unlikely but the slogan makes for good propaganda allowing for the focus to be deflected towards the imposition of increased tax's and various other resident cost, hardly any public input, lots of secrets.

This purchase (asking price is $150,000.00) will be the first city acquisition of property potentially enlarging McDonalds Commons since the early 1970's when all of the future park property was purchased, one partial at a time. Included was the purchase of property that had been used by a local trash collection company as their dumping area. There were several African American family's residing in that part of Dawson Road, eventually selling their homes to the City of Madeira, eventually becoming our only City of Madeira owned park.

Several years ago, Madeira Parks and Recreation committee members proposed that a play area be developed alongside the creek that flows alongside the entrance leading to McDonalds Commons. This same creek also flows behind 7401 and 7409 Dawson Road. The idea for a play area was nixed because of environmental issues and concerns. This story will be continued after city council provides further details. 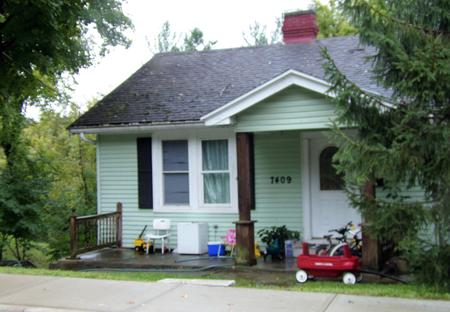 ​     ​City of Madeira Attorneys Brian Fox and Steven Goodin of the Graydon Law Firm, argued in court today, that the letter from Fox (posted above) to developer Powers was adequate in rescinding the various variances approved from the Madeira Planning Commission. Lawyers from the firm, Frost Brown Todd disagreed, and argued that the letter was not sufficient and that only the Planning Commission should have the authority to rescind formally, Planning Commission approved variances. Fox also divulged in court today that rescinding, the variances was because of ethics issues, and Fox described the ethics violation as a member of Planning Commission and the Historic Preservation Commission having an interest in property adjoining the vacant B&B Mower property. Fox had learned in a letter from Attorney George Parker, (page 2) that City Council member, Planning Commission and Historic Preservation Commission member Chris Hilberg has ownership in property that adjoins the vacant B&B property. Hilbergs family purchased the property from the City of Madeira for $1.00. Apparently Hilbergs ownership interest in this property had been concealed from Fox meaning that there may be further questions of ethics violations. The Honorable Judge Robert Ruehlman will make his ruling by the end of next week. More coming. June 10, 2017, the May 17, 2017 trial transcript. Judge Ruehlman asked City Attorney Fox about the conflict of interest that led to the letter sent to Powers (top of this page) rescinding all of the Madeira Planning Commission approved variances. Fox said that "it was a property ownership issue", ( Hilberg ) "requiring the applicant (Powers, Jerry & John Johnson) to resubmit". Judge Ruehlman asked "so now its not gone through", Attorney Goodin answered "Its over". Please notethat the two Madeira city lawyers are both partners at the Graydon law firm and have been representing Developer Powers  while representing our city raising conflict of interest issues and various other ethical issues. ​As of todays date the plaintiffs have not received or been made aware of a ruling in this matter. ​June 21, 2017, Judge Ruehlman handed the city of Madeira a favorable verdict on June 12, 2017, but with unintended consequences. Case number A1606293 will end all chances for the Swingline Grill and the sale of the B&B Mower property. The verdict will not effect other redevelopment plans contemplated for our downtown Historic District and other downtown properties. The court verdict will surely effect our November City Council election results. This story is just developing, much more coming.

​    Planning Commission Variances that were granted to Jerry and John Johnson,

​    and developer Thomas Powers, are rescinded, a knife in the Swingline Grill

​    that his and the Johnsons variances are no longer valid. Judge Ruehlman also

​    less than truthful in the court hearing. Discussions are in progress potentially       Goodin, "Its Over"

​    conceivably may include several new restaurants, a Meat Market and a Flower      Fox,   "application rejected"

​ Water is a Madeira issue because of an aging infrastructure

​and the associated upkeep. In parts of Madeira water is not an issue because the infrastructure is not the responsibility of the City of Madeira. Residents residing in "old Madeira" began as Cincinnati Water customers, but that changed more than a half century ago when the city decided to purchase water from the Village of Indian Hill, but Indian Hill did not take ownership of the water distribution system, water mains and related infrastructure. Indian Hill also was unwilling to expand the Madeira water distribution system beyond the old Madeira footprint. As Madeira grew through annexation nearly all of the new residents were already connected to the Cincinnati Water system, where the distribution system was owned by Cincinnati.