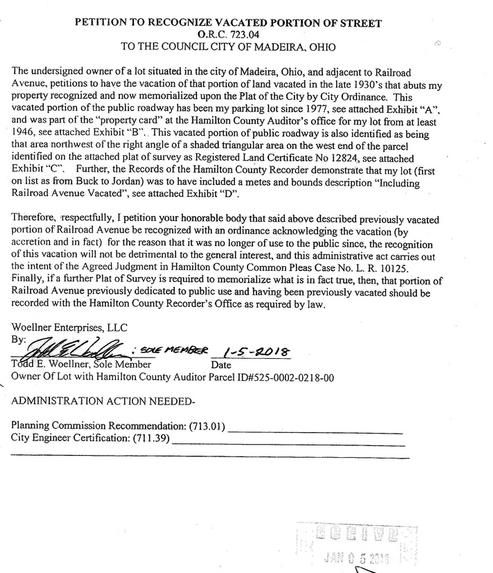 Chris became concerned about the condition of our sports fields and other facilities, when Dick Hartman suggested that Chris should become a Parks and Recreation Commission member, and in 1990 he did become a member. Dick Hartman was a Madeira  High School teacher, and in the summer served our city, managing Madeira Parks. During his nearly 30 years, Chris has proudly served our commmunity in events that have included the Easter Egg Hunt, 4th of July Parade, Memorial Day March, the Street Dance, the Bon Fire, Saint Nick Night, Shakespere in the Park, and Mad Puppets. In some instances Chris has been instrumental in first initiating the events. He also is credited with the acqusition of playground equipment and actually drew the original drawings for a new building at McDonald Commons. The building has room for concessions and three separate storage compartments. The city does not on a regular basics open the consession area, but instead allows organizations to operate concessions. Some things have changed, Chris says there is less baseball but more La Cross and soccer players. One thing that Chris lights up about is the construction of the Veterans Memorial located at McDonalds Commons on Dawson Road. The memorial honors every branch of our military, all of the work was completed with volunteers and the material was either donated or purchased with cash donations.

Talking about Madeira parades, Chris said that he would like to see more parade floats and marching bands. In 2014 while walking up the Miami Avenue hill Chris suffered a serious heart attack requiring a quadruple bypass. In 2015 he walked halfway of the parade route and this year walked the entire route. ​Chris is still an active member of Parks and Recreation and will continue volunteering, but plans to begin "passing the torch"  to the younger members serving on the commission.

Right Middle Photo, Chris standing in front of playground equipment at McDonald Commons Park. Chris was instrumental in the acquisition 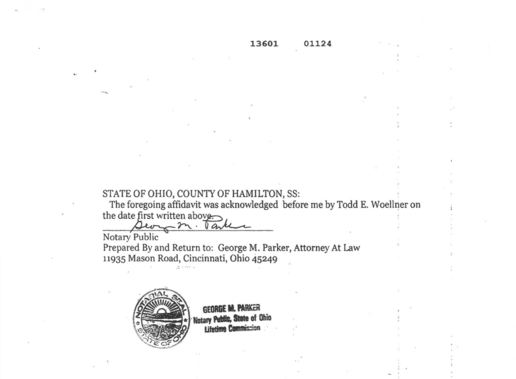 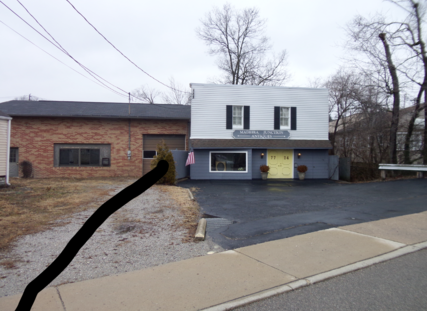 ​         A spokesman from the office of Dusty Rhodes offered some new information today explaining that the call in 2016 from Madeira City Manager Moeller was just a normal part of business at the Hamilton County Auditors office, and that if any other Madeira resident were to call Auditors office employee Sean O'Brien, just as Moeller did, Sean would promptly check his property cards and not hesitate, after making certain determinations, changing the neighbors real-Estate records, if necessary "taking" that neighbors property, with no notice given to the neighbor. This is what Sean did after receiving the call from Manager Moeller, in regards to the Woellner property located on Railroad Avenue.​​ 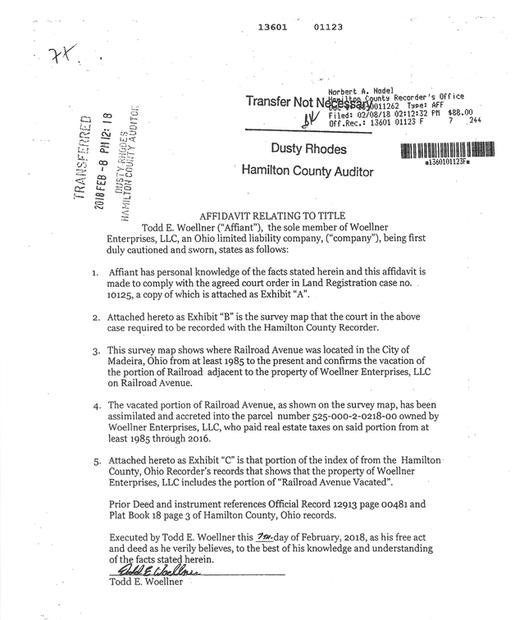 ​  Loveland Attorney, George Parker went to the podium and addressed Mayor Traci Bayer Theis, Vice Mayor Nancy Spencer and councilmembers, Mueller, Adrien, Hilberg, Gehring, and Luther. Parker presented a petition signed by his client "Woellner Enterprizes" demanding that the Mayor, Vice Mayor and five Madeira council members pass the required legislation "recognizing and acknowledging the vacation (by accretion and in fact) for the reason that it no longer of use to the public since, the recognition of this vacation will not be detrimental to the general interest, and this administration act carries out the intent of the agreed Judgement in the Hamilton County Pleas Court Case No. L.R. 10125" See full text posted top right >>>>>>>>>>>>.

​     No less than two times Woellner's Attorney George Parker stated that in 2016 Madeira City Manager Moeller, took the liberty of making a phone call to an employee working for Hamilton County Auditor Dusty Rhodes, enticing the employee to manipulate the Real Estate records of property located at 7724 Railroad Avenue, in effect reducing the footprint by approximately 800 Square Foot. Of course Moellers action also reduced the value of the Woellner property. It is not clear if there were members of City Council involved in Moellers illegal actions, if so the members of council were complicit. 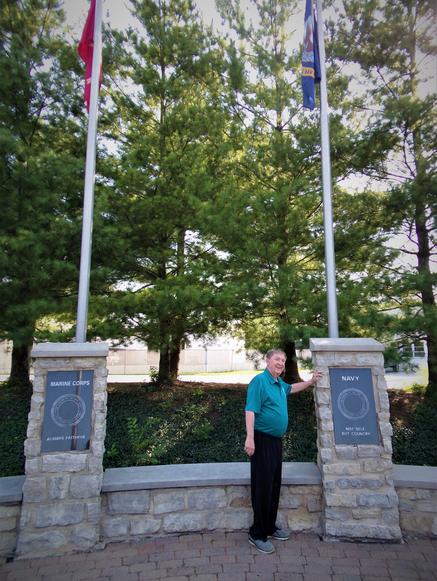 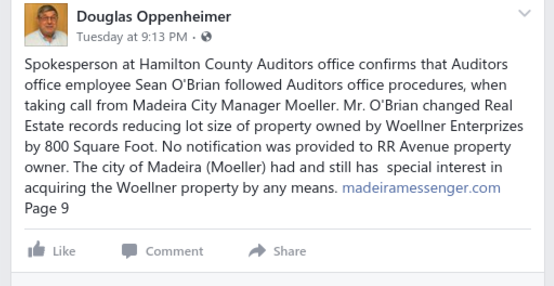 ​Madeira City Manager Thomas Moeller, Mayor Traci Bayer Theis, Vice Mayor Nancy Spencer, and our five Council members have failed in their effort "taking" property located at 7724 Railroad Avenue. Now the question, why was it so important that our city manager saw fit to mysteriously make that call to the office of Dusty Rhodes, misleading (maybe) an employee  working for Rhodes, to change Madeira Real Estate property ownership  records. Afterwards, 800 Square foot of real estate at 7724 Railroad Avenue suddenly became the property of the City of Madeira, with no explanation and no notice to Mr. Woellner, owner of the Railroad Avenue property. It is a known fact that Madeira City officials have needed the Woellner property on Railroad Avenue for access to the B&B Mower Property, the focus of eight years of failed development efforts.

​    The photo above shows us why "stealing" this Railroad Avenue property from the rightful owner was so important to our city officials, and also points out the pitfall of spending nearly eight years colluding with only one developer wasting hundreds of thousands in Madeira tax dollars, with a desire shared with local Madeira politicians to plant an ill conceived restaurant in an ill conceived space on Railroad Avenue. Yes there is the question of WHY?

Once upon a time there was the Madeira Recreation Association, a Non-Profit Madeira organization organized by volunteers, and not part of Madeira Government.  The MRA elected officers, raised money, and organized the 4th of July Parade, and the Memorial Day "Parade" . I said not part of government, but in those days our Mayor and other city officials were active participants and supporters of the MRA. Prior to 1977 Madeira City officials supported and participated in all of our Madeira organizations. It was soon after 1977 when the MRA was disbanded and all of their activities were included in the Madeira Parks and Recreation Commission description.

It would be impossible to talk about Madeira Parks and Recreation Commission without talking about Chris Carr. Chris entered the scene just shy of thirty years ago, when he was a young man still personally active in various Madeira sports programs. Chris didn't grow up in Madeira, but was close by. He attended Saint Johns grade school in Deer Park and would eventually be a graduate from the "new" Moeller High School, in 1968. He played football for Coach Jerry Faust although he excelled at Baseball. Chris and his family have resided in Madeira since 1976, first on Oseola before moving to North Mingo. 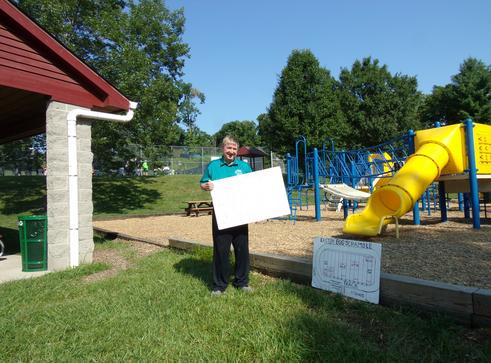 ​​​​"Dusty Rhodes, Douglas Oppenheimer As we discussed in detail yesterday, no one in this office "took" anything from anyone. The property was inaccurately described in our records dating back to before I was Auditor. Neither the owner of the adjoining property nor Madeira ever questioned it. When they did we corrected it according to the property's deed. To infer that we "took" the property or that our office would do something similar for anyone who calls without proper documentation is simply wrong" 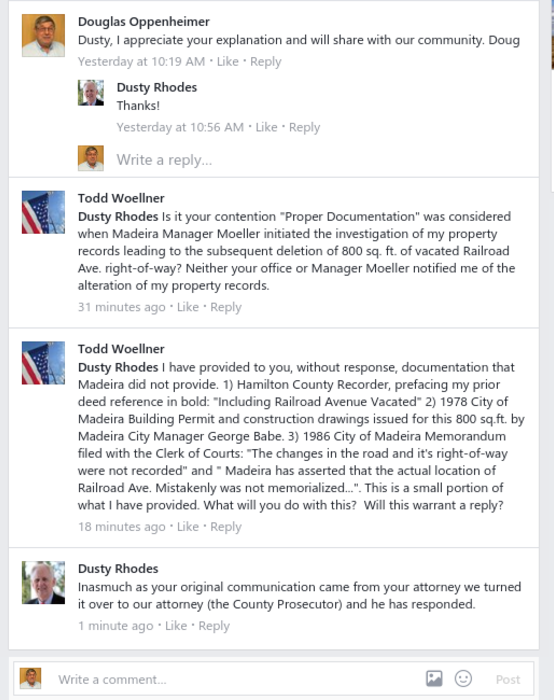 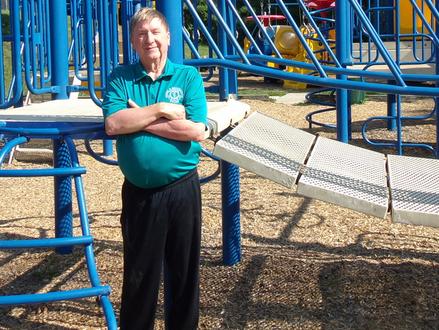